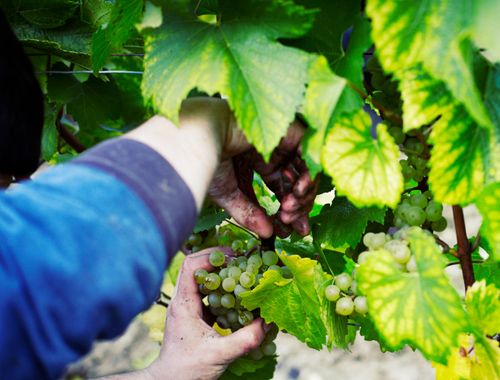 The weather was then once again cool and wet and the vine's development was slow. Blossoms began to appear gradually around June 12th, and were fully open on June 23rd, finishing in early July.

Fine weather settled in on June 25th, with some beautiful summer days. Remarkably, in the first half of the year, 580mm of rain fell on the region – the average for an entire year usually in the Yonne area!

After July 14th, hope was at a low ebb for 2013 yields: spring rainfall and prolonged flowering caused highly significant millerandage. Bunches were loose and small.

With the exception of a smattering of thunderstorms, July passed uneventfully. Mildew remained absent, but powdery mildew appeared in some parcels.

Like July, August brought some beautiful sunny days. The weather deteriorated on August 25th, when the rains returned and brought cooler temperatures.

September was fine, and even warm on 20th-25th, with temperatures above 25°C in the afternoons with a southerly breeze. This climate helped to boost potential alcohol significantly, but also caused a drop in acidity, leading to increases in grey rot.

The harvest, which was initially planned to start on October 10th, in fact began on October 2nd in Séchets.

Plagued with doubt and scepticism, 2013 is a vintage for genuine winemakers. Yields are certainly lower in comparison with the last few years; but careful vineyard work and optimum surveillance of fruit ripeness brought excellent quality to those who were able to exercise patience.