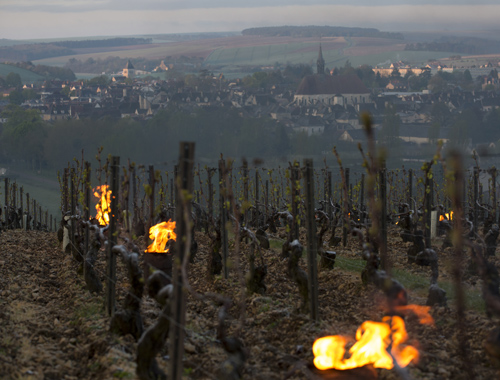 The year began under a blanket of thick fog.

The end of January was frosty, with several days reaching -10°C. February was cool and humid.

In early March we finished pruning in a much milder climate and towards the 10th of the month we could already see a change in the buds, which would suggest early budbreak... And on 25 March budbreak occurred. April began cloudy but with a dry atmosphere, then around the 12th, a high pressure system settled over France, which brought the risk of frost. And the first frost took place on the night of 17 to 18 April, when temperatures plummeted to -2°C. Initially we saw no immediate damage, but the frost during this first night actually had an impact on the lower part of the Montée de Tonnerre vineyard. The next day, and during all the subsequent nights up until Saturday 29 April, the frost nibbled away at a few buds every day. The right bank (Montée de Tonnerre, Fourchaume, Grand Crus) was particularly impacted, but we also found damage in our Forêts, Vaillons, and Montmain vineyards and the majority of our Chablis parcels. In addition, even though it hadn’t necessarily destroyed the vines within the immediate Chablis area (as was the case for Lignorelles and Maligny), the frost had a significant quantitative impact in that it stopped a lot of inflorescence.

The first two weeks of May were rather cool, then the warmer temperatures at the end of the month sped up the growing process. The first open blossoms were detected on the 26th. Full flowering occurred on 5 June. The vine was then in full growth and trellising was carried out quickly. The last two weeks in June were scorching hot, and fungal diseases were rare. The bunches benefited from ideal weather conditions for their fertility, but were rather scarce in number!

July brought alternating mild weather and storms. Precipitation reached more than 150 mm, and these conditions continued until 10 August. Humidity led to the appearance of mildew spots and some Botrytis in the vineyard - but without any real damage this year. Veraison began on around 25 July. From mid-August the weather became summery again, and the ripeness of the grapes accelerated. The excessive rain from July became a rarity, and the harvest looked to be affected from this lack of water. Harvesting began on 6 September. The juices were ripe and balanced but the quantities were once again minimal.

The conclusions of the 2016 vintage also apply to 2017: limited quantities but a year of high quality for the future vintage.