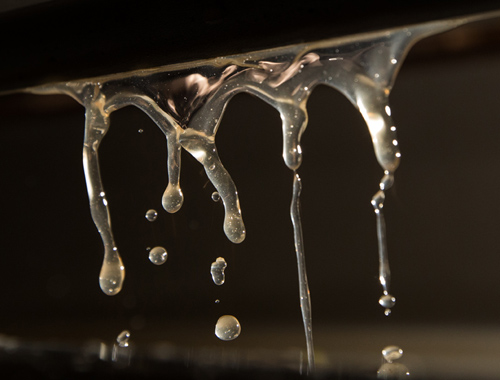 January and February brought unseasonably mild temperatures. There was just one morning in late January when the mercury dropped to -8°C during this particularly clement winter.

Late February and early March were very damp, and March persisted with chilly weather... It certainly wasn't still winter but there was little sign of spring either!

The vines began showing tentative signs of life around 10 April, and budbreak began slowly. Then a high-pressure system arrived on around 15 April, bringing clear weather both day and night. On Monday 18 April we all got a nasty surprise: the temperature dropped to -3°C and the future harvest in the valley bottoms was already in danger. The worst affected parcels were the lower Chablis vineyards, but the frosts also hit the lower Montmains. Before the vine's growing cycle had even begun, 3.3 hectares were already affected by frost.

We lost no time deciding to bring out the paraffin smudge pots to protect some of the Grand Crus, parts of Montée de Tonnerre and the Vaulorents vineyards, because frost forecasts were looking gloomy for the coming days.

Several warnings were issued, and we lit the smudge pots for the first time on the morning of the 24 April, and for the last time on 27 April. The damage for the village of Chablis and for the Domaine was negligible.

However, the final morning (27 April) was devastating for hundreds of hectares throughout the Yonne department, because the cold hit most of the higher vineyards (at the tops of the slopes) in the form of black frost. Huge swathes of the Auxerrois vineyards were affected, as well as Ligny, Fleys, Chemilly, Poily, Béru, Viviers and so on, with some vineyards completely wiped out by frost. Such a catastrophe had not occurred since 1991.

The end of April and the beginning of May brought damp and cool weather, which did nothing to encourage the growth of the vineyards affected by frost. Both the amount of rain and the number of rainy days in May were significant. In fact, we had already received the amount of rain normally recorded for a whole year.

One afternoon on 13 May, a violent hailstorm destroyed the vineyards and flooded the villages of Ligny and Maligny. Fontenay and Chablis were also affected, but less than the western parts of the vineyard. Two hundred millimetres of rainfall battered the area in just one hour!

Two weeks later, the Auxerrois vineyards (St Bris and Chitry), as well as Préhy, Courgis, Chablis, Chichée and Poilly were subjected to another catastrophic hailstorm, leaving the vines in tatters. The hail was so strong that the affected vine stock looked as it does during the winter.

This calamitous weather ripped through 40% of the entire vineyard. In living memory, nobody, even the most veteran winemakers, could remember such a disaster. (In fact you need to go back to the 1950s to find even a similar series of events, in terms of both climate and yield).

After the frosts and the hail, it was mildew's turn to attack. Early June was still rainy, and the disease took hold with unbridled speed, literally munching its way through the less well-protected parcels.

Flowering began on 25 June, around two weeks later than usual.

And the sun didn't come out for any sustained length of time until late June. July, August and the first two weeks of September were warm and sunny.

With the drop in humidity, mildew released its grip. The grapes developed well, and bunches were closed by 20 July. Veraison began on around 20 August. Despite a catastrophic start to the season, the fruit ripened in very good conditions. The first samples were taken on 16 September. Picking began on 27 September and was finished by 4 October.

Volumes are much lower than the previous vintage, with a drop in yield of 50%.