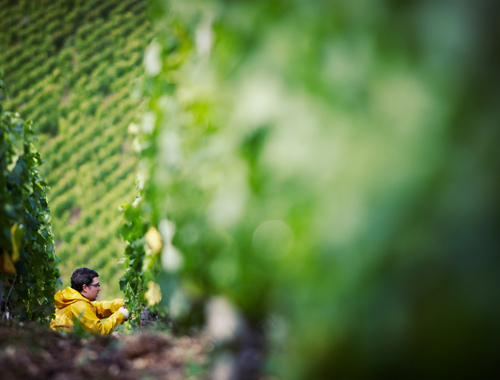 Early 2015 was punctuated with alternating fine and rainy days. These weeks were set aside for pruning in the vineyards.

From mid-February, the fine and mild weather heralded the early arrival of spring, and enabled us to begin ploughing.

March brought the pruning season to an end, and the buds began to swell in the middle of the month.

Budbreak occured right at the start of April, as it did in 2014. This month was also particularly fine and sunny, which built up our hopes for an exceptional year...

But the rains returned at the end of the month, and in early May there was some very heavy rainfall (100 mm) and some flooding in the Vallée du Serein. The vine grew steadily and trellising progressed well. At the end of May, the flower buds were ready to open.

The vineyards were in full bloom by 8 June, so the theoretical harvest date was set for between 12 and 15 September. The weather stayed very sunny with a scorching week of heatwave between the 22 and 27 June (43°C was recorded on 24th of the month). This very warm weather encouraged rapid growth in the grapes. Fruit set was fast and the bunches were closed by 10 July. The first berries began ripening on 23 July in Vaillons. Might the harvest be earlier than we had thought?

July and August 2015 were very dry and the vines showed some signs of hydric stress. The plants were healthy however, so treatments were kept to a strict minimum and were stopped as soon as possible.

Some rainfall in mid-August allowed the vines and the grapes to regain a little of their lost water. At the end of the month, we were fairly confident that the vintage would be a great one, and initial samples confirmed our hopes.

But our hopes were soon dashed. On 1st September at around 1.30am, Chablis was the target for a catastrophic hailstorm which left the vines devastated by the small hours of the morning. The impact was disastrous: almost the entire Domaine had suffered.

A race against the clock then began, to get the harvest started as quickly as possible. We knew that the more quickly we could harvest the grapes, the better we could preserve their quality.

So we began on the morning of 3 September, harvesting the worst-affected areas first with as many resources as possible, then we went on picking in unaffected areas until 10 September.

This reactivity allowed us to save the crop, by bringing in grapes that hadn't had the time to rot or dry out, in weather conditions that were cool and dry after the hail.