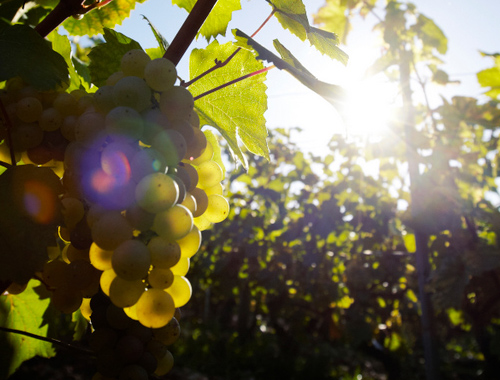 In a similar way to 2013, winter 2014 meant humidity and unusual mildness. Cold weather never arrived – and neither did snow – and the last few days of February brought early spring mildness.  March and April were incredibly fine and sunny.

The first sap began to run from the pruning cuts towards the end of March and we saw bud break in the first few days of April. It was about 4 to 5 days earlier than the average noted over the last few years and 15 days earlier than in 2013, which was particularly late.

We were worried in early May because we had two episodes of freezing temperatures which damaged the vines on the bottom of the slopes, but the damage was nonetheless limited over the whole vineyard.

Then in mid-May to early June the climate was very up and down, with chilly days followed by storms and showers. Vine growth was therefore limited.

Radical climate change came about on the Pentecost weekend (7 and 9 June) with a period of heatwave: the vine grew almost 50 cm in three days, and flowered in just under a week!  The median flowering date was confirmed as 10 June, which gave us a theoretical date to start the harvest of between 15 and 20 September.

The month of June continued uneventfully and without rain, and included days of trellising in the vineyards.

July brought rain, which on some days became plentiful, and caused erosion damage in some of the vineyards. The rain built up considerably to around 175 mm. Temperatures were nevertheless quite mild. This weather continued until mid-August (on 13th, 65 mm of rain fell on the vineyards).

The consequences on the vineyard of this significant amount of rain (250 mm for the two warmest and driest months of the year, a record since the 1950s) for July/August were:

On around 25th August, blue skies returned and September gave us a full month of summer weather – warm and fine – which allowed the grapes to reach full maturity.

For the Domaine, the 2014 harvest was spread between 17 September and 1 October, with a constant effort to achieve the best ripeness, despite having to stop harvesting for several days in order to achieve this target.